Friends Life Care is a Quaker-values based, nonprofit organization. We help to take care of members who choose to age at home. In my position as a plan counselor, I am often asked how Quaker values are incorporated into the work we do.

This begins a blog series on Quakerism.  In it, we will explore Quaker values and how they pertain to our organization, the members we serve and the work we do in our community.

Some of you who are reading this post may be Friends and already know much more than me about the history, values and expression of Quakerism.  For others, my hope is that you will enjoy learning about it as much as I have.

So on a personal note, Quaker values are having a powerful effect in my own life. As such, I will also share my feelings about and wonderful experiences with the Society of Friends and will explain the impact these things are having on me as as this series continues.

George Fox is considered to be the founder of Quakerism. He came of age in the 17th century during a chaotic and turbulent time in history. The English Civil War of 1642 to 1651 was the backdrop for his youth.  It was a fight for religious freedom over the monopoly of the Church of England.

In his search to understand the world, Fox found little to no solace with the priests and preachers of the day. He neither liked the hierarchy, pride or hypocrisy he felt that he experienced within the church.  In his own words, he wrote, “…for I saw there is none among them all that could speak to my condition.”

Therefore Fox came to a place of emptiness, where nothing outside himself could give him answers to his philosophical questions. It was in this space that he had a personal encounter with God. This encounter transformed Fox and would become the basis of Quakerism; that is each person could go directly to God without the need of priests or pastors as middlemen.  Any individual can have their own direct communication with the Spirit.

This epiphany was radical and heretical for its day, as was the tenant he shared that each person carries within them a piece of the Divine and Inner Light of God. Fox expressed this through a new spiritual group he formed with like minded people.

What’s in a Name

George Fox and his followers went through an evolution in naming their group. They started out briefly calling themselves Children of Light, Friends of Truth and Publishers of Truth 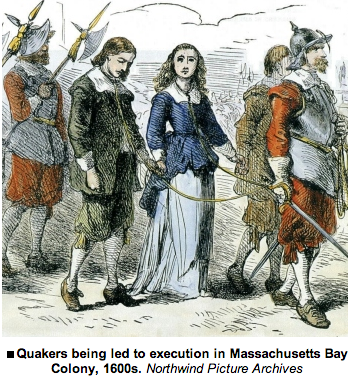 before settling on the Religious Society of Friends which is now officially called the Society of Friends. The term Quaker has two possible backstories associated with it. In Fox’s journal he relays a story of telling a judge he should “quake” before the name of God. Other stories describe the name Quaker as a derision that the Quakers adopted, being that when the Spirit moved within them, their bodies physically quaked. There was talk that Fox and others shared the belief in the biblical passage that people should tremble at the Word of the Lord.

Today, the words used to describe them are Quakers, Friends and the Society of Friends.

Testimonies and the SPICES

Quakers did experience persecution for their beliefs in England and as they moved into new areas of the world.  They stayed true to their faith and brought with them their truth of seeing divinity in each person. Out of this revelation came the Testimonies which are at the foundation of the values that Quakers embody.

Testimonies are what Quakers call the ways they have found to live and act based upon their beliefs. The word “testimony” is used by Friends to describe a witness to the living truth within the human heart as it is acted out in everyday life.  Importantly, the testimonies are not fixed dogma; rather, they are a guide for Quakers personal and professional lives. “SPICES” is an acronym commonly used to describe these important values:

Simplicity – focusing on what is truly important and letting other things fall away.

Peace – seeking justice and healing for all people; taking away the causes of war in the ways we will.

Integrity – acting on what we believe, telling the truth, and doing what we say we will.

Community – supporting one another in our faith journeys and in times of joy and sorrow; sharing with and caring for each other.

Equality – treating everyone, everywhere, as equally precious to God, recognizing that everyone has gifts to share.

Stewardship (Sustainability) – caring for the earth, valuing, and responding to all of God’s creation; using only fair share of the earth’s resources; working for policies that protect the planet.

For me personally, Quakerism has been like finding home, values over dogma, a value on each person’s inner light. Every voice is of equal importance, living simply yet with a fierce drive for social justice and equality for all.

I have sat in many pews in different churches and various denominations. I am by nature a seeker yet was never fully content with my findings. When first presented with the Hallmarks of Quaker values, I knew my search was over and felt the beginnings of something far greater than I could have imagined. I am feeling that I am the sanctuary and within the seat of my heart the Light is always lit. As I share in this video, the values of Quakerism mean a lot to me.

Perhaps that is what Fox meant when he said, “The Lord showed me, so that I did see clearly, that he did not dwell in these temples which men had commanded and set up, but in people’s hearts…his people were his temple, and he dwelt in them.”

Although the chaos in our world may be a different more modern version from George Fox’s time, I say let’s take with us the testimony of peace in the days, weeks and months ahead. And may we move forward choosing to see the Spark of the Divine in both ourselves and others.

We welcome all to comment on your experiences of Quakerism. Please continue with us, as we explore the values in the work we do here at Friends Life Care.  If you are interested in learning more, check out this informational video on YouTube from a Quaker scholar:

“Quaker Religion professor Max Carter of Guilford College discusses the Quakers (documentary interview format) the diggers, levelers and other movements, how they began and the different elements of influence, including Radicalism, Restorationism, Apocalypticism, Perfectionism and Paracelsianism.”

Joylyn joined Friends Life Care in 2017 as a Sales Manager on the sales and marketing team. She brings many years of experience with inside sales in both business-to-business and consumer.  Previously she held positions selling to vertical markets like the federal government and meeting tough sales quotas for technology and IT offerings.  She is excited to be a part of Friends Life Care and appreciates working in an organization guided by Quaker values.

Originally from Southern California, Joylyn has called the east coast home for over 20 years. Last year she relocated her 88-year old father from California to her home in Pennsylvania.  She now manages his care as he has a diagnosis of Alzheimer’s. He is her favorite person; and she finds it an honor to care for the man who once took care of her.

Joylyn earned a Bachelor of Science degree in Drama, TV and Film.  In addition, she completed some graduate studies in Communications at Regent University. Joylyn volunteers with a local theatre company performing onstage or working behind the scenes.